Not that you can’t project to the wall! You can, more as a cost-saving measure, but don’t expect the same quality of display as from a projector screen. Screens are specially made to deliver the best possible pictures. With optical coatings that ensure better reflection of images, projector screens deliver more contrast and colour saturation and definitely sharper, more brilliant images. With wall projection, the resultant image will fall short of the performance level your projector is capable of. Besides, your wall will hardly be perfectly smooth, which can show in the pictures and the paint you use may also add to quality deterioration. So, something gives when you opt to go without a projector screen.

In case you are not sure what a projector screen is, the projector screen is a display surface to which a projector projects (“shoots”) its image. That way, what is shown by the projector displays on the screen, where it can be viewed. Screens are mostly white, but can be gray, in colour. They are made of suitable fabric, stretched into a frame. There are differences in design, size and what is called aspect ratio, to meet the specific demands of different presentation settings.

If you decide to include a projection screen in your presentation toolkit shopping list, you need to know what projector screen options you have and what each one can do for you. Projector screens can really last long, so they represent a good investment, whether for home entertainment or business and other presentations. Just ensure you buy from a reputable and reliable source and that you get one that best suits your purpose. Now, let’s begin to explore the types and sizes of projector screens and how best to use each.

You can broadly classify projection screens as:

Portable projector screens are primarily for mobile presentations, where the screen is moved from one location to another at various times of use. It could also be in various rooms in the same location. If it is in the same venue, which is possible, there would be a reason to prefer repeated set-ups and dismantling, instead of a permanent fixture. For whatever reason that you want a screen that is not fixed to the ceiling or wall in a permanent setup, you will need one of the portable projector screens.

Portable projector screen can come in any of these design options: 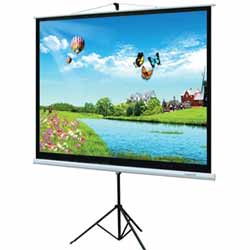 For a user who makes marketing stops with presentations or is running trainings on multi-location basis or using projector displays for mobile religious evangelism, a tripod screen would be ideal. You set up at your stop, run your presentation and simply pack it up and go. Tripod projector screens, like other screen types, come in different sizes, as discussed later in this piece.

In addition to their portability advantage for mobile use, tripod projector screens are also more pocket-friendly and widely used.

The Floor Pull-up projector screen is designed like a roll-up advert banner. It has a base, which is the casing that holds the screen. Place it on the floor and pull up as designed and your screen shoots up for use. A rising pole, as in the case of a roll-up banner, is at the back of the screen to hold it up. Once done with your presentation, you release it back into the casing and off you go. Incidentally floor pull-up screens are not very popular in the Nigerian market, where portable tripod projection screens, which have a cheaper price profile, have held sway.

1.3 Double Stand Outdoor Screen
Still in portable design, two legs hold this screen like flags or banners used for match-past. Simply open it and stand on the two legs and your screen is ready for use.

Unlike the portable projector screens, mounted screens are intended for a fixed venue and are installed once for continuous use. They are not intended to be moved from location to location and can indeed be used without being touched, unlike portable screens that have to be handled and set up and dismantled at each point of use. That factor gives mounted screens a basis for longer service life. They can be fixed in position – stretched out for use – or they are retractable –extended out when being used, but rolled into the casing when not in use.

Mountable projection screens are usually mounted to the ceiling or wall, depending on installation dynamics. While the electric and manual types are retractable (get rolled back into their casing after use), the fixed frame type is not. Here are more details about those sub-categories: 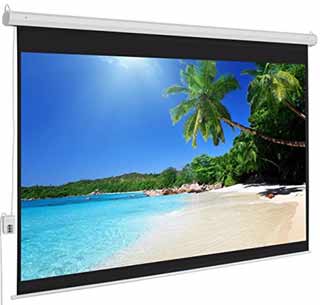 That’s why they are also called motorized projector screens. Electric screens can be ceiling-mounted or wall-mounted. The screen surface can be retracted into the casing, when not in use. Just with a push of the button, the screen can be lowered for use – it easily rolls out of the casing and hangs down for your display.

2.2 Manual Projector Screen
Like the electric projector screen, the manual screen can be ceiling-mounted or wall-mounted. 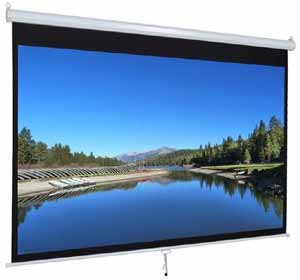 This projector screen type is also installed in a permanent sense. You only need to lower it to use and to roll it up when you want to. The manual projector screen is operated manually. It has no remote control, so you physically pull it down or up with its spring mechanism.

Since the manual operation is some avoidable work in the presence of the remote-controlled option, why would anybody prefer the manual projector screen? One major reason is cost. The remote-controlled electric projector screen costs more. Also, some users hold the fear that the motor mechanism of the electric screen will fail sooner than later, though this is not supported by experience. Also, the electric screen has more weight, though hardly a serious factor, since the screens are installed in a permanent, non-movable way. 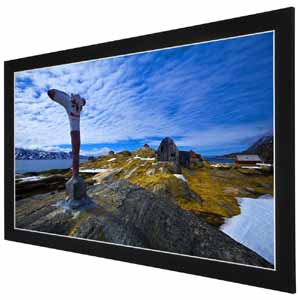 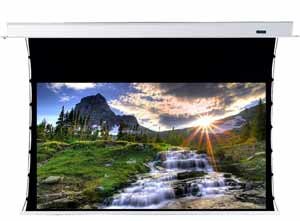 Choosing a projector screen type is a bridge you must cross if you want to use a screen. Still, you have to determine the right screen size to buy.

The size of space available for placing your screen is a limiting factor, as the screen must fit into that space or become useless. So, you must measure and be sure of the limit you can go. The depth of the room matters too, as you need to consider how far viewers can sit from the screen and the ideal spot to mount the projector. Personal preferences of size will also count. As a guide, however, a general recommendation is to use a screen size (diagonal) that’s equal to or less than distance from closing seating point to surface of screen.

Some calculations can be made to establish required screen size, given the room space, wall size and other related factors, but an average intending user will hardly want that much rigour.

Projector screen sizes are most times stated in inches. So the 96 screen is 96 inches, which converts to 8 feet or 2.44m. Also be aware that stated screen sizes are the diagonal measurement. The width of the screen is approximately 87% of that screen diagonal.

Want to buy a screen? View available screen types and prices here and you can place an order, right away!

Screen aspect ratio is the width to the height of the screen. It goes from a perfectly square one (1:1 aspect ratio), to slightly more width than height (4:3) to screens that are much wider than their height (16:10, 16:9 and 2.35:1). Just as the screen has aspect ratio, the projectors also have aspect ratio and your inputs like Blu-ray player, laptop, etc have their display aspect ratio. Sychronising aspect ratio between your screen and the source that display to it is the right way to aim or brilliant image display.